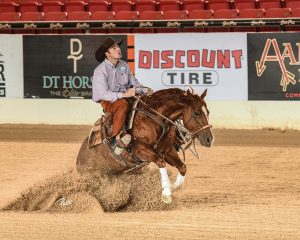 Stallion, Metallic Masterpiece is a show-stopper. “Quasi” has amassed multiple championships and an impressive earnings resume in his time in the show pen. Yet, it’s his incredible story – one of strength, determination, heart and try – that sets him apart. Photo Credit: Performance Horse Photography/Laura Cowen

In the much-beloved 1996 Disney classic, “The Hunchback of Notre Dame”, we meet the malformed bell-ringer of the Notre Dame cathedral, Quasimodo. Misunderstood and mocked by the locals, Quasimodo rises above and after a series of events, driven by love and heroism, is celebrated as a hero and accepted into society.

In 2011, a sorrel colt with four socks and a big blaze was born at Wagonhound Land and Livestock in Douglas, Wyoming. The Wagonhound has produced performance superstars, including stand-out cutting horse stallion, WR This Cats Smart. It was no doubt the little sorrel colt was intended for the same path. The colt was by one of the stand-out stallions of our era, Metallic Cat and out of Kings Masterpiece by Peppy San Badger, one of Equi-Stat’s Top 25 All-Time Leading Reined Cow Horse Producers. So regally bred that his name echoed the same sentiment, he was registered as Metallic Masterpiece. As a baby, still on his mother’s side, Metallic Masterpiece was in his stall when he ran into a wall and crashed, breaking his back in the process. It would seem that’s where the story would have ended, but, it was just the beginning.

“When my husband took over in 1999 we didn’t have a huge horse program. Thad felt strongly that we needed to use horses on the ranch, he felt it was very important to keep the tradition of the horse program, and build it from there.” The York’s acquired WR One Eyed Jack for the Silver Spur, a son of WR This Cats Smart out of Miss Ann Oleana by Miss N Cash. WR One Eyed Jack was aptly named, “We got a call about a horse who had cutting blood lines but had lost his eye as a foal. It was a son of WR out of Miss Ann Oleana, a mare who had won the NCHA Pacific Coast Futurity and quite a bit of money. So here’s this foal that they had high hopes for that had no eye. Al Larson owned him and asked if we’d be interested in him as a stallion prospect. He had great lines but they didn’t have a job for him.” At the time the Silver Spur was breeding mainly foundation-bred horses and felt the influence of cow-bred bloodlines would be a bonus to their program. “WR One Eyed Jack was really great for our program, he started to put some contemporary cattle blood in our line.” The stallion produced multiple great horses, including Versatility Ranch Horse world champion SS Hey One Eye.

“The story of WR One Eyed Jack is one I like to tell people,” says York, “I’m standing at a horse sale and i’m telling this story to the manager at Wagonhound, Dustin Ewing. I’m joking around about my one eyed horse that was out of their stallion. A week later I get a phone call, it’s Dustin and he says, ‘hey we have this horse, he has a great pedigree, but he has a broken back, we aren’t totally sure what his future holds but we want him to go somewhere good, and we don’t want to put him through the production sale and have him go just anywhere.’” Ewing made them an offer, and York says she was jumping at the chance. “I wanted this horse so bad, but my husband [Thad] was dragging his feet. He said he didn’t know about this horse, and it took us a long time to get up there to see him. So long, in fact, that Wagonhound said they were going to pull the deal.”

When they arrived, there was Metallic Masterpiece. They saw a little colt with a huge amount of presence, but he did, indeed, have a hump on his back. After his break the colt had surgery to fuse his vertebrae, resulting in a cosmetic hump but with no pain associated to it. The veterinarians said they thought he’d be sound, but York laughs, “of course you’re looking at him like, are you sure?” York hadn’t made the trip to go see the colt, she was basing her evaluation on blood lines but she says, “At that time it was like, even if we never ride him, he will benefit our program, let’s get him.”

Metallic Masterpiece arrived at the Silver Spur in his two-year-old year, hump and all, and was given the name “Quasi”, after the heroic bell-ringer of Notre Dame. At first the team attempted to work around Quasi’s deformity, “we cut out all these saddle pads, changed up all this tack, and then we decided to send him to Kyle Trahern to see if he could train him. Kyle just rode him, no fancy saddle pads, he said, ‘we are just going to have to see if this is going to work.’” Trahern felt the colt was a little behind, but he found him trainable, a trait common of Metallic Cat offspring. York remarks, “they are pretty trainable horses, it’s just a matter of getting the great out of them.”

In 2014, Quasi’s three-year-old year, Trahern took the stallion to a small futurity to see how he’d do – he stepped up to the plate. Trahern decided that the duo would set their sites on the crown jewel of cow horse, the NRCHA Snaffle Bit Futurity. “Quasi really came on at Snaffle Bit, Kyle made three level finals on him.” For the Silver Spur Ranches, Quasi was their first cow horse to hit the Snaffle Bit, and he did it in a major way. York laughs, “It was so cool, they bring all the finalist owners out on a red carpet, and after it was all over I kept thinking it was a dream come true. Everyone told me jokingly, ‘hey, this isn’t how every snaffle bit goes.’” Quasi continued to defy expectations, winning the NRCHA Intermediate Open Derby Reserve Champion, and continuing strong throughout his classic years. Now seven, he has amassed $72,149 in cow horse competition.

The stallion is athletic, and a true competitor. “In cow horse they talk about a horse being a fence horse, Quasi is the epitome of a fence horse,” York says of their stallion. “He shines going down the fence. He is going to head a cow so incredibly strong, he reads cattle so well. He has this look to him, it’s hard to put into words. He’s a compact little guy, but he has this neck that arches and stretches – he’s gorgeous. He just has this amazing presence, he’s always in control, he dominates it.”

The stallion also exemplifies heart and try, “Everybody says his story describes his heart, he just is what he is – I don’t know if he’s so special because he had to fight to get over his broken back, but he is so special, he’s pretty amazing.”

This year’s World’s Great Horseman competition signalled the last scheduled show for Quasi. Unfortunately the great stallion just missed the finals after some tough luck. He marked a strong 218.5 in the rein work, and showed he was meant to be there with a 223 in the steer stopping, finishing 12 out of the record-breaking 50 entries. 10 went back to the finals. York says that she’s not sad about the end of Quasi’s show career, but is instead excited about his future as a sire. “After World’s Greatest, he’s being delivered to the Four Sixes for the breeding season. I’m not sad, because I’m excited about the next phase, our first foal crop is on the ground, our second is baking and this year will be the first year we’ve opened his books to the public.”

Plus, when he’s not at the breeding station, he’s home where he can be enjoyed by the crew at the Silver Spur. “He stays at the ranch in the off season so he’s always around,” York says with a smile. “As a show horse, what else does he have to prove? I want him to leave the show pen still desiring the show pen and happy. Sometimes they’ll campaign a horse after aged events to put more money on him but I look at it like, does he need to prove anything else? He’s won a lot of money in the NRCHA and we just felt like it was a good time, to retire him young, enjoy him, and let him breed.”

Quasi’s bridle and tack will still be on the ready, as he remains Trahern’s go-to horse on the ranch. “If Kyle has something to do on the ranch, Quasi is the horse he grabs. When Silver Spurs won the Best of the Remuda award Quasi was the horse Kyle was on in all the photos that were published. If you look closely you can usually see Quasi in the branding trap with Kyle.”

The final piece of the incredible story of Metallic Masterpiece is that he also represents a great horseman that the Silver Spur lost. On September 7, 2016, Kris Wilson, accomplished horseman, member of the horse and cattle industry, husband and father and manager of the Bell and TO Ranches, lost a valiant battle with cancer. York says that for them, Quasi represents a living legacy that Wilson left behind. “Kris hooked up us with Kyle to train Quasi, he was such a big part of everything, all of our successes. He was a huge part in Silver Spurs being awarded the Best of the Remuda award, getting Kyle to come on-board to our team, so many of the things that happened were a huge part of Kris.”

Metallic Masterpiece is also a symbol of the future of the illustrious Silver Spur, “I always feel like this horse played a big part in making the Spur what it is today. We were just fortunate that someone called us and said ‘hey, do you want this broken-backed baby?’ This horse has become such a huge part of our program, and our lives. So many of the great people that have become involved in our program are because of him. He’s a huge part of where our program is growing too. I feel like we are on the uphill, and Quasi is a huge part of that.” 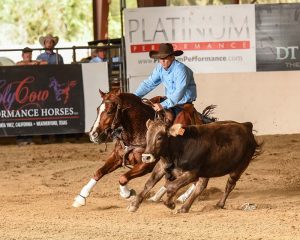 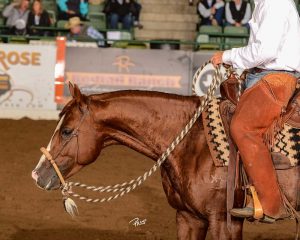