With a ranch as large as the Silver Spur, it is hard to tell each Divisions story. 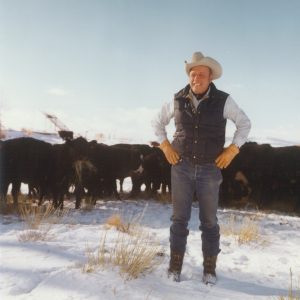 From the original Silver Spur in Wyoming to the Bell Ranch in New Mexico, the history of each ranch is special.  None more than the story of Ol Jim’.

James A. York, better known as ‘Ol Jim York went to work for the Silver Spur in 1960 when it was owned by Bill Sidley.   His progressive cattle-handling and record keeping to improve herd genetics and quality were pioneering methods for his time and were incentives for future generations to follow and improve upon.

‘Ol Jim remained involved with the ranch until his death in December of 2010.  He not only influenced the Silver Spur’s philosophy of innovation and diversity but also its philosophy of hiring cowboys.  ‘Ol Jim looked for “a hand that goes at it like he owns it and takes pride in what he does.”

Even though ‘Ol Jim is no longer physically a member of the Silver Spur team, he continues to remain with us in spirit as we fondly remember his often quoted sayings, philosophies and common sense approach to daily living.